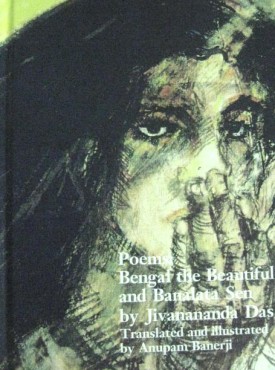 Poems: Bengal the Beautiful and Banalata Sen by Jivanananda Das

Translated and illustrated by Anupam Banerji

Jivanananda Das (1899 – 1954) is perhaps the most influential poet in Bengali literature of the post-Tagore period. His unique and unorthodox style changed the direction of Bengali poetry, particularly during the second half of the twentieth century. This edition of Jivanananda Das’ poems includes his landmark collections Rooposhi Bangla and Banalata Sen, translated into English by Anupam Banerji to commemorate the 1999 centenary of Das’ birth. The translator also provides 40 original illustrations of his poems.

Dimly recognised during his lifetime, today Das is acknowledged by The Companion to World Poetry as “the premier poet of the post-Tagore era in India”* and Bangladesh. Banalata Sen is one of Das’s finest poems, certainly his most popular. The Rooposhi Bangla (Beautiful Bengal) celebrated the beauty of the Bengali countryside. Soon after the publication Rooposhi Bangla, it became an immediate favorite and was especially cherished by Bengali nationalists fighting in 1971 for Bangladeshi secession from Pakistan.

“After Rabindranath, Jivanananda was the creator of a new kind of modernity in Bengali poetry. He gave birth to a completely new kind of language. In this context all of his anthologies are important… It is difficult to defy and contradict the revered poets of the world. Jivananda is one such revered poet.”—Binoy Majumdar.

” In the Post-Tagore era, Jivanananda was the most successful in creating a ring of poetry of uniqueness.” – Buddhadeb Bhattacharjee

“The poems are now part of the Bengali consciousness, on both sides of the border dividing India from what was Pakistan and is now Bangladesh; it’s safe to claim that Das is the pre-eminent and best loved Bengali poet after Tagore.” —Amit Chaudhuri

Anupam Banerji is Professor Emeritus of the schools of Architecture and Planning at University of Waterloo, Ontario Canada.