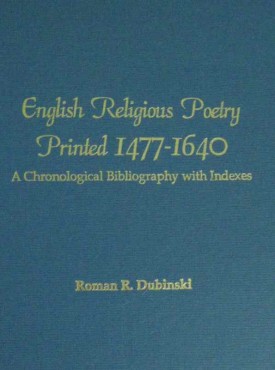 This volume has been compiled Roman R. Dubinski, Professor Emeritus in the Department of English at the University of Waterloo, whose previous publications include Alexander Brome: Poems (University of Toronto Press) and articles on the religious poetry of John Donne.  The chronological bibliography contains 2,456 entries itemizing over 11,600 individual poems, comprising close to a million lines of verse. It includes original poems, translations, and excerpts in both English and Scots verse, but excludes verse found in dramatic or quasi-dramatic works.

These broad criteria for inclusion make English Religious Poetry Printed 1477-1640 a rich source of bibliographic information on a wide range of poetic forms, including

Each entry records up to 20 fields of information, including the author (or translator), book title, STC number, copy examined, date, signature reference for each religious poem, title and first line of the poem, its verse form and number of lines, and up to 11 other fields of information. Subsequent editions and issues are listed, including modern facsimiles and editions. References to other bibliographies and information about the source and attribution of the entry are also included.

This work allows scholars access to poetic responses to the many theological and ecclesiastical controversies of the Reformation era.  It also makes available the precedents drawn upon by the great religious poets of the seventeenth century, such as Donne, Herbert, Vaughan, Crashaw and Milton.

“Scholars of the Early Modern Period will be indebted to Roman R. Dubinski’s mammoth contribution to the bibliographical study of religious poetry of the period. … This exhaustive compilation will become an essential tool for library reference and should prove invaluable to students and scholars alike.” – Margo Swiss (York University), English Studies in Canada

“Significant features of this bibliography are its relative completeness (covering almost a million lines of verse) and its chronological ordering, which should certainly facilitate historical and contextual studies….. [I]t will make a valuable addition to any university library where Renaissance literature studies are taken seriously.” – Daniel W. Doerksen (University of New Brunswick) Renaissance & Reformation

This reference volume incorporates and goes beyond: