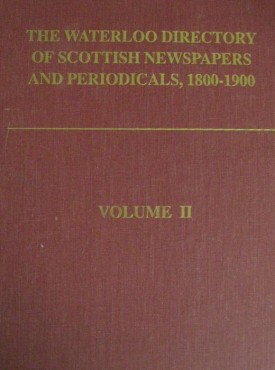 Directory of Scottish Newspapers and Periodicals, 1800-1900

The Waterloo Directory of Scottish Newspapers
and Periodicals, 1800-1900
(2 Volumes)

The Waterloo Directory of Scottish Newspapers and Periodicals, 1800-1900 is an alphabetical listing and description of newspaper and periodical publications in Scotland in all fields, including the arts, sciences, professions, trades, labour, agriculture, industry, entertainment, sport, church, children, women and finance. Publications described in the Scottish Directory range from daily to annual frequency and at their inception were projected to continue for an indefinite period of time; so, almanacs, postal directories and annual reports of societies are included while serially published multi-volume works of fiction or government reports in several parts over regular intervals are excluded.

The wealth of information in this Directory was gathered directly from the issues of these periodicals and from the general and periodical card catalogues of most Scottish libraries, making this a standard reference work for anyone interested in nineteenth-century Scottish culture.

THE IMPORTANCE OF 19TH-CENTURY PERIODICALS

The Scottish periodical press in the nineteenth-century was more pervasive in its influence than was the book trade: in the popular press it provided news of advances in science, technology and empire; in the specialist periodicals it united the country in a communications network linking thousands of professional, religious, political, charitable, and scientific organizations.

The entries in this Directory were gathered from the general, periodical and newspaper catalogues of the major Scottish libraries. For thoroughness and accuracy, up to six issues were read for most titles. In addition, some 550 secondary sources were searched (including every issue of Scottish Notes and Queries, for example) in order to record the comments of thousands of historians, bibliographers, cataloguers, and other scholars. Multiple library locations of the issues, in full or partial runs, are provided in many instances.

HISTORY OF THE PROJECT

Inclusiveness and scope across all subjects and fields

What the scholars say about the Waterloo Directory series:

“The Waterloo Directory [of Scottish Newspapers and Periodicals, 1800-1900] … offers the most accurate and complete accumulation of information on Scottish serial publication. The extensive indexing makes essential sources for the study of nearly all facets of nineteenth-century Scottish life and culture readily accessible for the first time. An indispensable work that supercedes all earlier bibliographies listing nineteenth-century Scottish periodicals and newspapers and stands as an example of the kind of guide needed for serials of other countries and periods.”

“The Waterloo Directory of Scottish Newspapers and Periodicals, 1800-1900…is the best published model now available for the bibliographic representation of Victorian periodicals.”

“… a premier project in an enormously vital area: the bibliographical description and control of serial publication in Great Britain… The elaborate indices, with their revelations about interest groups, suggest new ways of conceiving the world of information and opinion in the century, and new methods of deploying evidence, including the statistical. In short, The Waterloo Directory is an indispensable enabling tool for every serious research library and for historical and literary scholars working in the period.”

David J. DeLaura, Avalon Foundation Professor in the Humanities and Professor of English, University of Pennsylvania