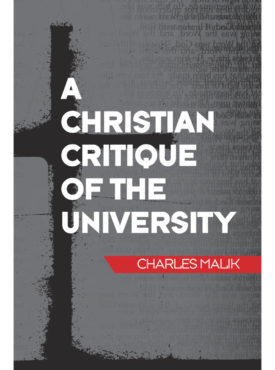 A Christian Critique of the University, 3rd ed.

This book is available as free eBook. Simply click the navigation symbols below to “play” the book, zoom and flip through the pages, or view page spreads.

Charles Malik was a Lebanese academic, politician and international diplomat. A Harvard Ph.D., he taught at Harvard, Dartmouth College, and the American University in Washington. He was Honorary Rector of the University of Dubuque, Fellow of the Institute for Advanced Religious Studies at University of Notre Dame, and Jacques Maritain Distinguished Professor of Moral and Political Philosophy at the Catholic University of America. He published extensively in both English and Arabic on philosophy, religion, politics, diplomacy, and the United Nations, and held honourary doctorates from more than fifty universities, including Toronto, Harvard, Yale, Princeton, Columbia, California, Boston and Freiberg.

It is indeed daring for a man of such credentials, respect, and authority to critique the university in the name of Jesus Christ. “The question is, what does Jesus Christ think of the University?,” says Malik, “What is the mind and spirit of this agency which dominates the world? The inquiry can be grounded in nothing more final and authoritative than Jesus Christ himself.”

Malik’s critique of the university is marked by an informed compassion for the institutions in which he invested his life. But he is nonetheless candid about his belief in the place of Christ in the university. For he asserts that “the greatest revolution ever was Jesus Christ himself; not his ideas, not his teachings, not his moral principles, but he himself; for nothing is greater, more revolutionary and more unbelievable than the Gospel of the Crucified, Resurrected and Glorified God who is to come again to judge the living and the dead.”

“Charles Malik is one of the most illustrious academic statesmen of our modern times…. This publication of his lectures… reflects an impressive contribution of the Pascal Lectures to Christian critical thinking in the twentieth century.”

“…This book is remarkably stimulating, … as accurate as one could hope to be about the spirit of the contemporary university, and never dull.”
Dr. David L. Jeffrey (University of Ottawa) Crux

“Truth cannot be antithetical to the Eternal Logos, yet the more we learn of science and philosophy the more alien we feel from faith and love and humility and unselfish service…. Briefly and yet profoundly Malik illustrates his thesis by discussing the university curriculum.”
– L. Russ Bush, Southwestern Journal of Theology