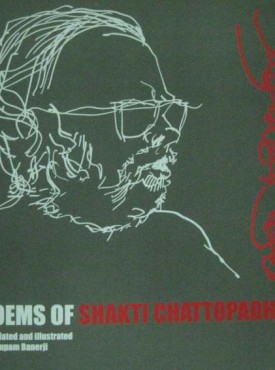 Translated and illustrated by Anupam Banerji

A legend in his lifetime, Shakti Chattopadhyay (1933 – 1995) composed more than two thousand poems as well as many novels, essays and articles. Next to Jivananada Das he is the most widely read poet of the post-Tagore era of Bengali literature. One of the Hungryalist Quartet, the avant garde cultural movement of the Bengali language begun in 1961, he was the winner of the Sahitya Akademi Award (India’s National Academy of Letters Award) and the Ananda Puraskar.

Shakti’s work brings the reader in touch with life’s loneliness, anxiety, dislocation and redemptive commitment to beauty. It may be said that Shakti is a leading light in the starry constellation of poetic talents of modern Bengal. This book contains over 100 of his poems plus 50 original illustrations by the translator.

Anupam Banerji is Professor Emeritus of the schools of Architecture and Planning at University of Waterloo, Ontario Canada.

“As I have read Anupam’s translations, a strange feeling has struck me: Anupam and Shakti have become one and inseparably so. Shakti’s mystical awareness is now Anupam’s. Shakti’s magic language is now Anupam’s too!”
– Ranjan Bandopadhay, Editor for Sangbad Pratidin and lecturer of English at Scottish Church College, Calcutta.