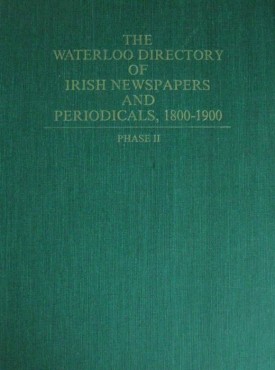 Directory of Irish Newspapers and Periodicals, 1800-1900

The Waterloo Directory of Irish Newspapers and Periodicals, 1800-1900 is an alphabetical listing and description of publications in Ireland in all fields, including the arts, sciences, professions, trades, labour, agriculture, industry, entertainment, sport, church and home.  Publications described in this Directory range from daily to annual frequency, and at their inception were projected to continue for an indefinite period of time, so that almanacs, postal directories and annual reports of societies are included while serially published multi-volume works of fiction or government reports in several parts over regular intervals are excluded.

The Waterloo Directory of Irish Newspapers and Periodicals, 1800-1900 captures the sweep of 19th century Irish history, documenting the beginnings of Irish nationalism in all its early forms, the effects of the Potato Famine of the late 1940’s and the rise of modernism. Significant contributors to Irish periodicals range from political agitators like William O’Brien and John Mitchel to then-burgeoning writers like W.B. Yeats, James Joyce,  Oscar Wilde, Bram Stoker and many others.

THE IMPORTANCE OF 19TH-CENTURY PERIODICALS

Newspapers and periodicals of the 19th-century represent a wider range of public and private opinion than those of the 20th-century, partly because the great publishing conglomerates did not yet dominate the scene.  Consequently, the 19th-century, during which so many of the precedents and customs of our century were established, became the first for which we have an enormously detailed record, and the lion’s share of this record exists in newspapers and periodicals.

The primary procedures for identifying titles for the Directory were to search out many previously published listings (subject listings, library listings, advertising directories), to read each issue of The Irish Book Lover since its inception, and to check all the shelved and un-shelved holdings of the Linen Hall Library, Belfast.  Shelf-checks were supplemented with a variety of different sources: prospectuses, subject bibliographies, card catalogues, indexes, histories, and specialized listings.

In recent years, library catalogues of the National Library of Ireland, the British Library and other libraries around the world have also contributed significantly to listings in the directory. Of course, the World Wide Web has opened up numerous other possibilities, allowing researchers to pull together a wide range of sources to put together the histories of many Irish newspapers and periodicals.

HISTORY OF THE PROJECT

What the scholars say about the Waterloo Directory series:

“The Waterloo Directory [of Irish Newspapers and Periodicals, 1800-1900] … offers the most accurate and complete accumulation of information on Irish serial publication. The extensive indexing makes essential sources for the study of nearly all facets of nineteenth-century Irish life and culture readily accessible for the first time. An indispensable work that supercedes all earlier bibliographies listing nineteenth-century Scottish periodicals and newspapers and stands as an example of the kind of guide needed for serials of other countries and periods.”

“The Waterloo Directory of Irish Newspapers and Periodicals, 1800-1900…is the best published model now available for the bibliographic representation of Victorian periodicals.”

“… a premier project in an enormously vital area: the bibliographical description and control of serial publication in Great Britain… The elaborate indices, with their revelations about interest groups, suggest new ways of conceiving the world of information and opinion in the century, and new methods of deploying evidence, including the statistical. In short, The Waterloo Directory is an indispensable enabling tool for every serious research library and for historical and literary scholars working in the period.”

David J. DeLaura, Avalon Foundation Professor in the Humanities and Professor of English, University of Pennsylvania