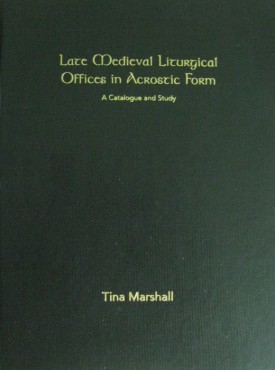 Tina Marshall’s Late Medieval Liturgical Offices in Acrostic Form: A Catalogue and Study builds on the work of Clemens Blume, Andrew Hughes and other scholars in locating, describing and cataloguing 42 liturgical acrostic offices found throughout continental Europe, composed between the eleventh and sixteenth centuries. The ‘rhymed office’ is a series of versified antiphons and responseries sung at fixed hours of the day as part of the liturgical worship of the Christian church. Specialised acrostic offices were composed by a variety of authors in a variety of styles. These were first catalogued throughout the Analecta Hymnica medii aevi, 55 volumes of hymns published between 1886 and 1922.

Marshall’s book catalogues her further research into this peculiar subgenre of liturgical poetry with a view to their insertion into the history of Medieval Latin literature.

“Dr. Marshall’s book is much more than an account of the acrostics in the repertory. It has detailed accounts of the acrostics themselves; their origin; their defects, caused by manuscript lacunae; local revisions in order and omissions; rearrangements caused by the change from monastic to secular use; their representation in the sources; the chronological sequence of the narrative; the implications of the wording; what they can tell us about authorship and date. [She also] presents information about the poetry and language; theological and doctrinal evidence about the texts; scriptural, exegetical and literary references; historical, geographical, and chronological background.”

– Andrew Hughes, Trinity College at the University of Toronto